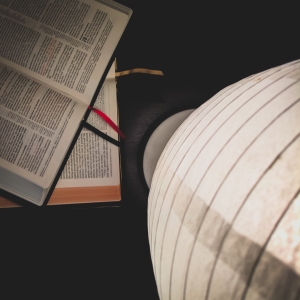 R
And when they came to the disciples, they saw a great crowd around them, and scribes arguing with them. And immediately all the crowd, when they saw him, were greatly amazed and ran up to him and greeted him. And he asked them, “What are you arguing about with them?” And someone from the crowd answered him, “Teacher, I brought my son to you, for he has a spirit that makes him mute. And whenever it seizes him, it throws him down, and he foams and grinds his teeth and becomes rigid. So I asked your disciples to cast it out, and they were not able.” And he answered them, “O faithless generation, how long am I to be with you? How long am I to bear with you? Bring him to me.” And they brought the boy to him. And when the spirit saw him, immediately it convulsed the boy, and he fell on the ground and rolled about, foaming at the mouth. And Jesus asked his father, “How long has this been happening to him?” And he said, “From childhood. And it has often cast him into fire and into water, to destroy him. But if you can do anything, have compassion on us and help us.” And Jesus said to him, “‘If you can’! All things are possible for one who believes.” Immediately the father of the child cried out and said, “I believe; help my unbelief!” And when Jesus saw that a crowd came running together, he rebuked the unclean spirit, saying to it, “You mute and deaf spirit, I command you, come out of him and never enter him again.” And after crying out and convulsing him terribly, it came out, and the boy was like a corpse, so that most of them said, “He is dead.” But Jesus took him by the hand and lifted him up, and he arose. And when he had entered the house, his disciples asked him privately, “Why could we not cast it out?” And he said to them, “This kind cannot be driven out by anything but prayer.”
Mark 9:14‭-‬29 ESV

E
I noticed two things in this reading. First, I noticed that Jesus was annoyed when he heard that the disciples could not cast out the demon themselves. He laments having to stay with such a faithless generation. At the end of the passage, he tells them what they were missing. Prayer. The disciples didn’t even try praying about it.

The second thing I thought was interesting was how Jesus rolled out this particular miracle. He let it happen in such a way that it looked like a failure at first. The crowd around the boy thought he was dead after the demon left him. But Jesus took his hand and lifted him up.

A
Faithlessness, according to this passage, is congruent with prayerlessness. Having faith is not just walking around in life feeling good about everything because you know God will fix it all. It’s getting on your face constantly and begging him to work in your situation. When I see injustice, or sickness, or pain in my life or others’, I do no one any favors just by trusting God will make good out of it. He’s obviously going to do that. I must pray and earnestly ask him for what I see as the need. It does change the outcome when I pray.

Also, sometimes at the end of a miracle, it doesn’t look like a miracle at all. More often than not, when God acts in a mighty way, he purposefully does it in such an unexpected way that we may be tempted to see it as a failure. Continue to trust all that God has promised, and everything else is going to be a part of the journey to the perfect end he’s always had planned.

P
Lord, I don’t want to neglect prayer as the most powerful mode of faith we have been given. Admitting that I’m hopeless without you allows faith to grow in my heart and change the outcome of things. Help me to wield this powerful weapon against unjust suffering I see in my life and others’ lives. Add to my prayers patience, when the outcome doesn’t seem right or isn’t exactly what I was praying for. Yours still at work, and I trust your idea of what the best outcome is above my own.

This post is part of my Weekly REAP series. I’m posting these from my personal journal to share what God is teaching me, and to give some practical examples of the REAP method.  I didn’t write any of these with publishing in mind, so forgive me if they don’t always wax eloquent. Here is some more information on the REAP study method.